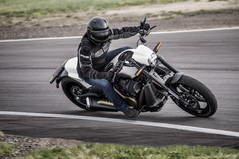 The newest 2019 Harley-Davidson® motorcycle is here, and it’s the Harley FXDR™ 114. Featuring classic Softail® stylings combined with modern innovations for an unbeatable riding experience, the FXDR™ is certain to blow you away. To see this and other new Harley-Davidson bikes for yourself, visit American Harley-Davidson in North Tonawanda, NY near Lockport, Niagara Falls, Buffalo, and Rochester, and our capable staff will be more than happy to show you our new Harley inventory.

With the most powerful engine available on a Softail®, the new FXDR™ gives you the highest performance possible from Harley-Davidson. Its Milwaukee-Eight® 114 engine packs tons of torque to let you roll on the passing power, tackle entrance ramps with ease and sail through every green light. Go fast on straight stretches and take corners with unbeatable agility on the FXDR™ 114. To further dazzle your senses, the 2-1-2 exhaust offers the intense rumble and roar customary to Harley-Davidson motorcycles so you sound as good as you look.

Screamin’ Eagle® NHRA drag bikes were the inspiration behind the new and improved air intake system on board the FXDR™. The Heavy Breather is reinterpreted with an exposed and forward-facing filter that allows for much better airflow to the engine. Each new Harley bike is built to constantly improve on older designs, and the FXDR™ is a prime example of this innovation and forward-thinking.

Further innovation comes in the form of the inverted racing-style fork that keeps your front wheel locked to the ground to improve how your bike brakes and handles on the road. The FXDR™ is additionally equipped with a monoshock rear suspension that features a single coil-over-shock with emulsion technology, to give the rider seamless handling that’s never before been seen. The angle between the swingarm and the frame allows for better travel and response time, having been optimized by Harley-Davidson as another example of how they continually improve on their incredible designs.

With a completely reinvented Softail® frame, the FXDR™ 114 gives the rider an unsurpassed amount of agility out on the road. The use of several alloy and composite components in the frame mean that it’s light in weight while still being heavy on muscle, courtesy of the Milwaukee-Eight® 114 powertrain. This skillful construction boosts the dynamic capability of the Softail® chassis, making the FXDR™ a powerhouse of performance.

The bike’s lengthened profile stems from the stretched fuel tank, which emulates the classic Softail® aggressive stylings. Harley-Davidson has completed the package by stocking the FXDR™ with as many modern features as they could fit on its frame. Some of these include a keyless ignition, a digital riser gauge, rear light and LED turn signals and the LED Daymaker™ headlamp. You won’t want for more on a bike this impressive.

You won’t want to miss your chance to get your very own Harley FXDR™ with all these incredible features. Remember, American Harley-Davidson is your New York Harley dealer, so make a point to stop by our dealership in North Tonawanda, near Niagara Falls and Buffalo to view the classic stylings of the Harley FXDR™ 114 for yourself.