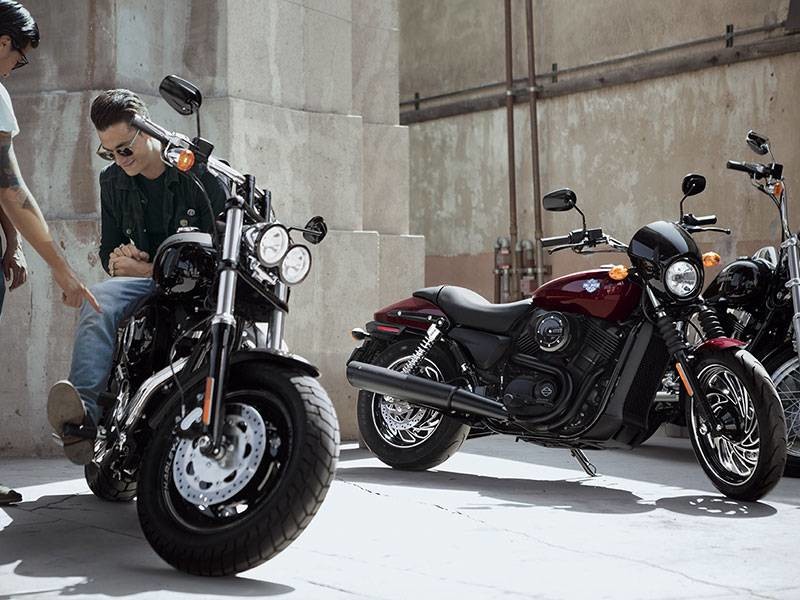 There’s a time for easy cruising, and there’s a time for tearing up the pavement. The all-new Harley-Davidson® Street Rod™ gives you the ability to keep it comfortable and calm when you want, while giving you a bridge to the wild side when you’ve just got to open up the throttle and let it ride. From the beastly engine, to the fine-tuned handling and suspension, this bike can handle whatever you throw at it. Is there any excuse to not set up a test ride today?

Everyone knows that Harley-Davidson® made their reputation on big, fast bikes with scary-powerful engines. What the Street Rod offers is a new take on Harley-Davidson® power, allowing for a middleweight chassis that can handle a variety of different riding conditions. The engineers started with the 750 cc High Output Revolution X™ engine. By using a 12:1 compression ratio, they were able to give the bike a redline of 9,000 rpm. This bike awesome power, while also maintaining restrained fuel consumption.

Because of its lighter weight and higher riding posture, this bike can also handle corner with ease. Riders can get as much as 40 degrees of lean in corners, which makes for more traction and power. The suspension does its part to improve handling with a 43 mm inverted front fork and a piggyback reservoir in the rear suspension.

With its aggressive stance and Dark Custom™ design, this bike is far from tame. The black components give the bike a menacing design. The fenders, you’ll find blacked out wheels and 2 piston floated disc brakes. The drag style handlebars provide superb control and comfort, while bar-end mirrors open up the field of vision. The Daymaker Projector LED headlight blazes away the darkness, leaving a bright, clear light to guide your way. The Screamin’ Eagle® Buckshot Exhaust provides a deafening volume of Harley growl. If you want to add your own spin, you can customize the bike with a number of genuine Harley-Davidson parts. When you customize through the dealership, you don’t have to worry about parts having inferior build quality or cohesion with the rest of the bike since they were made specifically for your bike by the manufacturer.

Harley-Davidson® ownership is a lifestyle choice as much as a consumer choice. As one of the oldest continually operating motorcycle companies in the United States, Harley-Davidson® has attracted a legion of loyal riders who choose Harley above all else. From the ownership clubs to the national Harley-Davidson® events, you’ll always find plenty of people who share your passion for the pleasure that is riding the best motorcycles available. And with the Street Rod, you’ll be bringing one of Harley-Davidson®’s most fun, rideable bikes to every gathering. This bike always attracts envious stares. So what are you waiting for? Set up a test ride and see for yourself what makes this slick new bike so special.