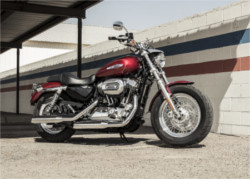 The engine you’ve been waiting for is here! Meet the new Milwaukee-Eight™ from Harley-Davidson®, this outstanding piece of machinery has been engineered from the ground up to provide everything a touring engine needs: Efficiency, heat management, light weight, and of course plenty of power. The four-valve per-head design lets the engine produce more torque and horsepower in the low RPM range, as well as at the red line. Compared to the Twin Cam engines that it replaces in the touring family, the Milwaukee-Eight™ provides a distinct acceleration advantage between zero and sixty, and continues the trend through the sixty-to-eighty mph range. If you want to feel the difference this outstanding engine makes, call (DN) in (PL) today and we’ll get you set up with a test ride on a Harley-Davidson® motorcycle with a Milwaukee-Eight™ engine!

The Milwaukee-Eight™ isn’t the only new piece of hardware on the 2017 touring family bikes. Now, these awesome machines feature a newly updated suspension system which provides the smoothest, most responsive ride yet. Harley® made several changes, the first of which was the addition of a Showa® Dual Bending Valve front fork which provides 117 mm of travel on standard bikes. The next step was adding a tool free pre-load adjustment to the rear shock, allowing you to get your bike ready for a hop on without needing to dig for your tool kit every time. Finally, the pistons in the front and back got beefed up so the dampening performance remains even throughout the full travel of the suspension.

The new line of Screamin’ Eagle® Performance Upgrades are here, and ready for installation on 2017 Harley-Davidson® bikes! If you’ve been eyeing a Sportster®, but wishing for more power? You can boost your bike with a Stage I upgrade. Maybe you’ve got ambitions of owning a Dyna®, but want to make sure that your bike is better than your neighbor’s stock model; in that case, check out a Stage IV performance upgrade, and you’ll be pulling ahead in no time! These awesome upgrades are compatible with Softail®, Dyna®, and Touring family motorcycles from 2007 and on, as well as Sportster® models from 2014 and newer.

Your Home for 2017 Harley-Davidson® News and Upgrades