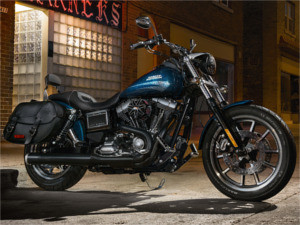 In over a century of history Harley-Davidson® has only released seven new big V-twin engine designs, and now it's time for the next step in innovation from Harley: The Milwaukee-Eight. This engine is designed to improve your touring ride in every way, and now the new Milwaukee-Eight engine is rolling onto a road near you on every 2017 Harley-Davidson® touring motorcycle! You can read a bit about this new engine here, but if you really want to get a first impression, stop by and see us at American Harley-Davidson® near Buffalo, New York, and let us set you up with a test ride!

The Milwaukee-Eight's history stretches back as far as the Harley-Davidson® Motor Company itself. The first Harley® engine ever assembled in Milwaukee was the Atmospheric V-Twin. Only a few of these first engines were produced before the F-Head, and later Flathead designs were implemented. Following these two early engines was the Knucklehead, which used an air cooled design that has formed the bedrock for Harley-Davidson® air cooled V-Twins ever since. The Shovelhead engine emerged some time later, powering the first Electra Glide motorcycles, and revolutionizing touring bikes. The latest touring engine is the Twin Cam engines that were first unveiled in 1999. While these engines are powerful, Harley-Davidson®'s commitment to creating the best motorcycles on the road is a tireless effort, and so the Milwaukee-Eight was born.

The Milwaukee-Eight is designed to offer a higher level of performance and comfort for touring riders. This engine's eight valve design and carefully mapped engine timing produce lower emissions, and improved fuel economy so you can get the most out of every last drop of gas. The Milwaukee-Eight is also designed with Twin Cooled™ technology to run cooler than any prior Harley-Davidson® touring motor, a difference that you're sure to feel if you ever get caught in stop and go traffic on a hot day. Not only does the Milwaukee-Eight run cooler, but it runs smoother. This engine is rubber mounted, and fitted with a counterbalancer, so it maintains the iconic sound of a Harley® engine, while producing less vibration, and reducing your fatigue while riding.

A higher level of performance doesn't mean much unless it's paired with outstanding power. The Milwaukee-Eight is a marked improvement from the Twin Cam engines that came before it, providing an acceleration advantage of over two bike lengths from zero to sixty. The increase in power is thanks in part to the large displacement design of the Milwaukee-Eight. Standard 2017 touring bikes will come equipped with a 107 cubic inch version of this engine, while the CVO touring models will feature a 114 cubic inch variant. For those who are looking for a truly incredible ride, the Milwaukee-Eight can be upgraded with a Screamin' Eagle performance upgrade kit, increasing the stock motor to a whopping 117 cubic inches of white knuckle adrenaline pumping power.

With power, performance, and a legacy that stretches back to the first engines Harley-Davidson® ever put on the road, the new Milwaukee-Eight is the perfect fit for the next generation of touring machines. Call us today at American Harley-Davidson® and schedule a test ride on one of our 2017 touring motorcycles and you can get a feel for the Milwaukee-Eight yourself! American Harley-Davidson® proudly serves the areas of Buffalo, Lockport, Niagara Falls, Batavia, and Rochester, New York, so stop by and see us today!