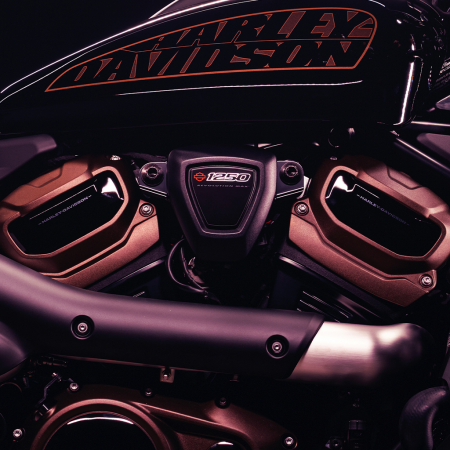 Late last year, we witnessed what we thought was the death of Harley-Davidson’s much anticipated Bronx model, a powerful (and presumably nimble) streetfighter-styled naked motorcycle that looked like a tantalizing addition to a Motor Company portfolio previously dominated by long, low and heavy cruisers. Word on the street was it would be nimble, with sporting ergonomics, come in two engine displacements, 975 and 1250cc, each claiming prodigious power numbers and featuring the engine as a stressed member, with upspec components to match. But after reading a just-dropped announcement from Harley-Davidson, we’re wondering if rumors of its demise may have been greatly exaggerated.

There’s some speculation it could be the canned Bronx streetfighter... or maybe something else entirely.Harley-Davidson

Harley’s pre-launch announcement, of course, is maddeningly vague, saying only that H-D will be hosting a new mid-season motorcycle reveal called “From Evolution to Revolution.” The release then reads, “This new model follows the exciting arrival of the Harley-Davidson Pan America 1250…” but the only real info about the bike’s positioning is barely touched upon in the next paragraph, where CEO Jochen Zeitz adds “...we are excited to reveal another all-new motorcycle, built on the Revolution Max platform in the sport segment, showcasing unmatched Harley-Davidson technology, performance and style.” The ‘sport segment’ phrase in the middle of that sentence is the telling part; the Bronx, as you may recall, was a bike largely seen as Harley’s exploratory thrust into new markets, designed to go up against the likes of Indian’s FTR1200 and other streetfighter-style machines when it was unveiled at EICMA in 2019 alongside the Pan America. There was speculation of it having a 975cc twin making 113hp and 70 lb-ft of torque, although a 1250cc version with 143hp and 90lb-ft was also on the cards. It had its own web page, product photos and more, so clearly product development was pretty far along at that point. It had all sounded more than acceptably sporty then, so...was the Bronx being given a new life now?

The attached teaser photo suggests a cruiser-style machine however, like this previously announced “High Performance Custom.”Harley-Davidson

Not so fast. An accompanying image with H-D’s press release shows a close up of the engine bay with the 1250 Revolution Max engine front and center, but it’s framed by elements we’ve previously seen on the “1250 performance custom” model, which we always assumed was going to be the next bike launched using the Revolution Max powertrain anyway, and which has already been confirmed by Harley as a 2021 model. You can clearly see the configuration and sweep of the pipes, particularly the header from the front cylinder, which mimics that of the cruiser model, and it’s clear that’s the bottom edge of a cruiser-style fuel tank above the cylinder heads as well. Images of the Bronx showed a different cluster of elements in the same location.

Then there’s the title of the launch event itself; “From Evolution to Revolution.” If that’s not a hint that the Sportster’s long-running Evolution engine is getting replaced with the new Revolution power plant, we don’t know what is. The 1250 “High Performance Custom” has long been rumored to be the new face for Harley’s aging Sportster line, and Zeitz’s mention of the “sport segment’ could just be a thinly veiled reference to that transition. Add all those clues to The Motor Company’s previous confirmation along with that teaser image, and it’s safe to say we’ll likely see the 1250 custom model next month rather than the Bronx; a four-valve liquid-cooled V-twin with the potential for 100-plus hp would definitely qualify as “sporty” in the cruiser world. Especially if it’s called a Sportster.

As with the Pan America, the new intro will be virtual, taking place on July 13. At the time, H-D says it will release more details of the new model and include presentations by Harley-Davidson leadership and product experts.

Get more info at www.H-D.com/JulyReveal and stay tuned for our report after the release.

You can also choose your dealer, initiate transactions online, and opt for delivery to your home too.Harley-Davidson

As for the Bronx, the company’s official statement last year was: “Harley-Davidson’s immediate new product focus in 2021 will be on the launch of Pan America, our first Adventure Touring motorcycle. We will not be launching the Bronx next year.”

Notice they didn’t say they wouldn’t launch it the following year. To our mind, the Bronx was never officially cancelled – just put on the back burner and left to marinate a while longer. The success of the new Pan America could also be a determining factor, so as far as we’re concerned we may see a streetfighter from Milwaukee yet. Just not this year.

Just out of curiosity: which model do you all think it will be?